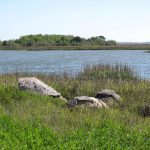 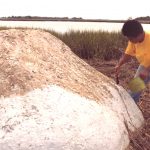 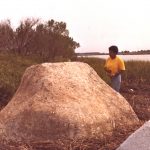 Beverly Buchanan’s practice referenced southern vernacular architecture to interrogate relationships between Black people, history, and the landscape. In 1981 Buchanan (1940–2015) placed a triangular formation of three sculptural mounds on the edge of the tidal marsh in Brunswick, GA. Titled Marsh Ruins, the large amorphous forms were made by layering concrete and tabby—a concrete made from lime, water, sand, oyster shells, and ash—and then staining the forms brown. This grouping is the most referenced work in the series of sculptural markers Buchanan placed in Georgia to memorialize sites of Black presence. Buchanan often explored the concept of ruination to uncover the transformative powers of distress and destruction. These markers symbolically bear witness to the 1803 mass suicide of enslaved Igbo people who collectively drowned themselves off the coast of nearby St. Simons Island. Although their exodus was forced by the traumatic capture and abuse of their bodies, their act of defiance made them free. The work remains visible to the public, though it is not clearly marked and blends in with its natural surroundings.

Tabby was used throughout the American South to construct shacks and quarters for enslaved people. This material functions as a protective shield for Marsh Ruins. Buchanan’s use of tabby, rather than such enduring materials as marble or steel, gestures to the material historically employed to construct Black people’s homes, which she revered. Vulnerable to nature and unstable marsh ground, these forms were intended to be lost to erosion. Buchanan welcomed nature to shift, fragment, and disintegrate her sculptures, knowing that, like the body, they would one day be completely obscured or forgotten. Succumbing to the earth, the materials live on in new forms. Marsh Ruins rejects the representational form of conventional monuments and memorials to speak poetically through the languages of materiality and ephemerality.” (credit)

There is also a 96-page book on this artwork.