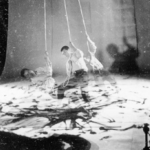 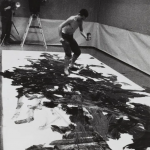 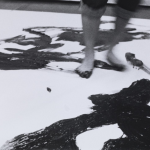 “Shiraga’s artistic legacy is rooted in post-war Japan when people were full of energy and there was excitement in the air pushing to try new things. This aspirational spirit, which reined in the society, led to the appearance of new art movements including one of the most famous and highly acclaimed groups, Gutai, of which Shiraga became one of the most renowned representatives.

Gutai Art Association, the first radical, post-war artistic group in Japan was founded in 1954 in Osaka under the leadership of Jiro Yoshihara. Yoshihara’s motto was simply to do what no one had done before and not to imitate others. The group’s artists that went on to great renown, like Saburo Murakami, Sadamasa Motonaga and, of course, Shiraga fully embraced the free spirit of the art and raw, concrete (Gutai in Japanese) creativity. However hardly anyone in the movement embodied Gutai’s philosophy more dramatically than Shiraga, who developed a unique technique of pouring paint on the canvas and creating brushstrokes with his feet by swinging on a rope hung from the ceiling.

Shiraga was born in Amagasaki, Hyogo Prefecture, in 1924 into the family of a kimono business owner. From early childhood due to his background he had access to the marvels of traditional Japanese art: calligraphy and antiques, classical theatre and cinema, ukiyo-e prints and ancient Chinese literature. After studying traditional Japanese painting in Kyoto, Shiraga fulfilled his long desire to explore Western paintings. He moved away from the figurative style and pursued a more emotional direction. As a result, in the early 1950s his work arrived at total abstraction following closely the mood of the times – to challenge conventional artistic forms. The Tokyo retrospective opens with a selection of Shiraga’s unfamiliar abstract works from this period dating as early as 1949 when the artist was only 25 years old.

Around 1952, Shiraga together with artists Murakami and Akira Kanayama formed the Zero Society (Zero-kai) relying on the idea that art should be created from the point of nothing. Shiraga started experimenting with fingers using them to make distinctive patterns, as shown in a couple of works on view. The finger technique eventually led him to placing the canvas flat to avoid the paint dripping. It made reaching the canvas center impossible unless the artist would step on it. And so he did. In summer 1954 the legendary Shiraga’s foot paintings (otherwise sometimes referred to as action paintings, the term originally coined for Jackson Pollock’s works) were born and the same year the artist joined the Gutai movement. The primordial energy of these new foot works explored tension as well as the sense of power. Sliding on the canvas Shiraga used his physical strength to reach a certain state between conscious and unconscious reducing his painting approach to a performance. It was a visual record, a memory of a specific action at a particular moment in time. Shiraga wouldn’t stop exploring the possibilities of a painting practice that would document his canvas exercises.” [credit]

“In July 1955 Shimamoto created his work Please Walk on Here as a part of the “Experimental Outdoor Exhibition of Modern Art to Challenge the Midsummer Sun” in Ashiya City.[20] The work consisted of two narrow sets of wooden boards arranged in a straight path. One set was stable to walk on while the other was unstable, akin to a broken rope bridge.[20] … Please Walk on Here was reproduced and exhibited on the occasion of the 1993 Venice Biennale.[11]” [credit]

“Co-founder of the Japanese avant-garde collective the Gutai Art Group in the 1950s, Shozo Shimamoto pioneered action painting, performance art, and mail art, with a prevailing concern for the tension between the element of chance and the artist’s control. Early in his career, while painting on newspaper, he accidentally punctured the surface—an entirely chance event that he would transform into a formal, repetitive operation. He began a career-long study of the violent encounter with the surface of the painting, primarily through the creation of holes and cuts. Painting in vivid color and forming abstract forms with irregularly patterned holes, Shimamoto found that his gestures left a record of the artist’s physical action and gave the image a performative element. He eventually expanded his practice into live performance, often staging the creation of his paintings for a live audience.” [credit] 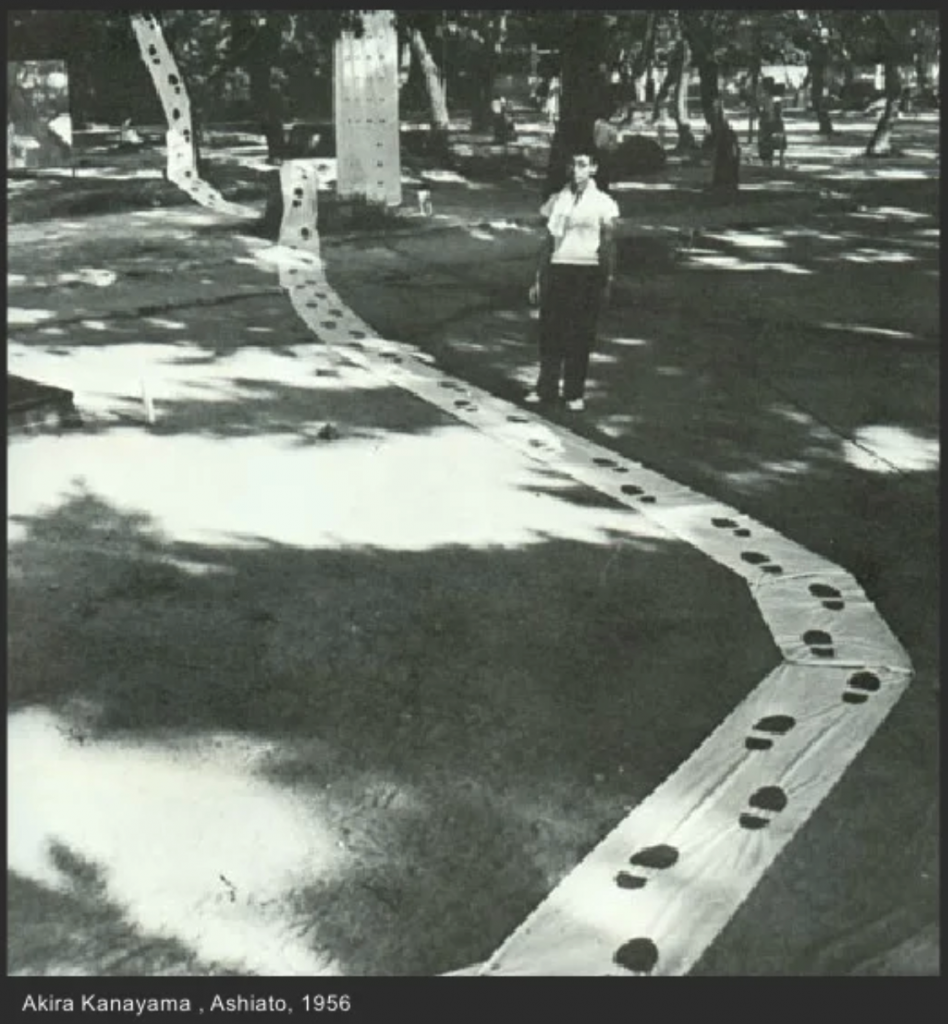 Akira Kanayama (1924-2006) was part of the Gutai Group in 1950s Japan. The installation created by Kanayam, was part of the 1956 show that fellow Gutai artists Yoshihara Jiro and Shimamoto Shozo participated in. A major theme for this outdoor exhibit was audience interaction with both the environment and the artwork. (credit)

“His use of plastic inflatables and footsteps on vinyl sheets in other works also suggest his positive interest in new materials and mediated representation of body.” [credit]