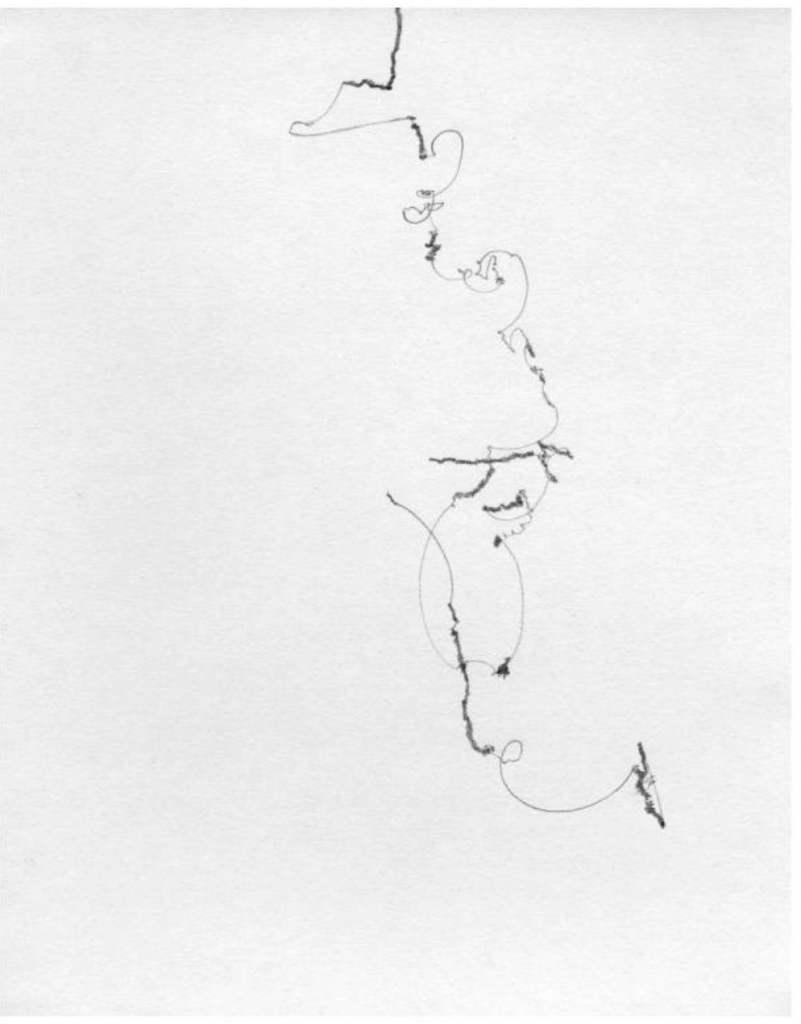 The City as Written by the City, Nov 2 2007, Walk to see Trudi and her new pin, Banff Centre – Banff Hospital

“Sarah Cullen’s recent works have resulted from collaborative activities with geographers and other artists. In the past, she has created alternative methods of mapping space using low-tech machines and devices of her own invention.

Cullen has, for example, created a ‘drawing box’ consisting of a pencil pendulum that is able to record her movement in space in equivalent strokes of graphite on paper when carried around on a walk. The resulting drawings are almost anti-maps, in the sense that they cannot offer objectivity or legibility. Instead, her artworks bear indexical traces of her presence and motion.

What we lose in immediacy, we gain something in a sense of the weight and measure of movement – of the particular gait and pace of an individual’s walking style. Each of us moves through space with a highly particular and identifiable walk: it is a marker of the way we have learnt to occupy the world. Cullen asks us to re-imagine how we can document the ways in which we have ‘become ourselves’, in motion rather than at rest.”

Photos from constructing the boxes and doing workshops

Taking a Line for a Walk from Susan Stockwell on Vimeo.

A film documenting a performance called Taking a Line For a Walk by artist Susan Stockwell. It shows a line being drawn around Stockwell in South London. Susan, with her Line Drawing machine, followed the boundary of old Stockwell and left a continuous line with temporary white paint. It lasted for 2 weeks, was 2.7 miles long and took 3 hours to draw. The idea was to make a work where a little known area of London was defined and mapped physically for all to see. The map was taken into 3 dimensions on a life size scale and turned into a walking drawing, a trace of an idea and a performance.

The performance was part of Stockwell Festival and came out of a project called ‘Taking a Line for a Walk: Mapping Stockwell’ which Susan did with pupils from Stockwell Park School.
Shot by Polly Nash, edited in collaboration with Susan Stockwell and produced by Spectacle Productions.
spectacle.co.uk/catalogue_production.php?id=165

Images from the performance, Taking a Line for a Walk have been published in the book, The Art of Walking: a field guide by David Evans Blackdog, 2013.
blackdogonline.com/all-books/the-art-of-walking.html”

‘Taking a Line for Walk’ (2003) was a performance where the artist drew a white line around the area of Stockwell in South London defining and mapping the district. The line was made with white poster paint and a Line Drawing Machine, it was 1.7 miles in length and lasted for 2 weeks. The idea was to physically define a little known area of London while also making a 3-dimensional walking drawing and a trace of an idea. It also references the artist’s name alluding to her identity and boundary setting.

‘Line Drawing’ is a 2-minute film that examines the line as it’s being drawn in ‘Taking a Line For a Walk’. The film concentrates on the essence of the line, the variety of marks, speed, character, rhythm and pavement surfaces. It creates a mesmeric, meditative and beautiful reflection of the drawings process and everyday pavements, seldom considered or seen. It’s sometimes difficult to know if the artist is taking the line for a walk or the line is leading the artist; perhaps a metaphor for artistic process and those magical moments when the art work takes on a life of its own.