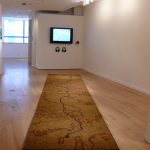 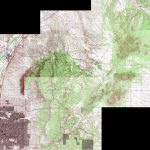 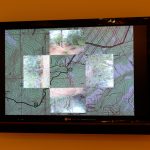 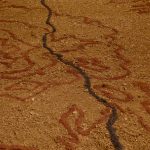 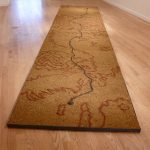 “For twenty-two years I have made the hour long drive from my house in Cerrillos to my office at the University of New Mexico. For this piece, I decided to walk to work. I strapped on a backpack, headed out my door and walked as straight a line as possible (given the variations in topography, land ownership, etc.) to my office at UNM. Along the roughly 50 mile trek across ranch land, the Sandia Mountains and the northeast quadrant of Albuquerque I recorded my perceptions from the perspective of a lone hiker walking across the land.

This work is part of a series of “Physiocartographies.” Started in 2003 in the field with the Land Arts of the American West mobile studio, the physiocartographies  series combines the abstraction of cartographic maps with the physical act of walking the surface of the planet to create portraits of place. In the various works from this series I follow prescribed paths across the landscape using a gps unit to navigate and record points, a camera to shoot images and a digital recorder to capture sounds. The final works appear as reconstructed maps, videos and installations.” (credit) 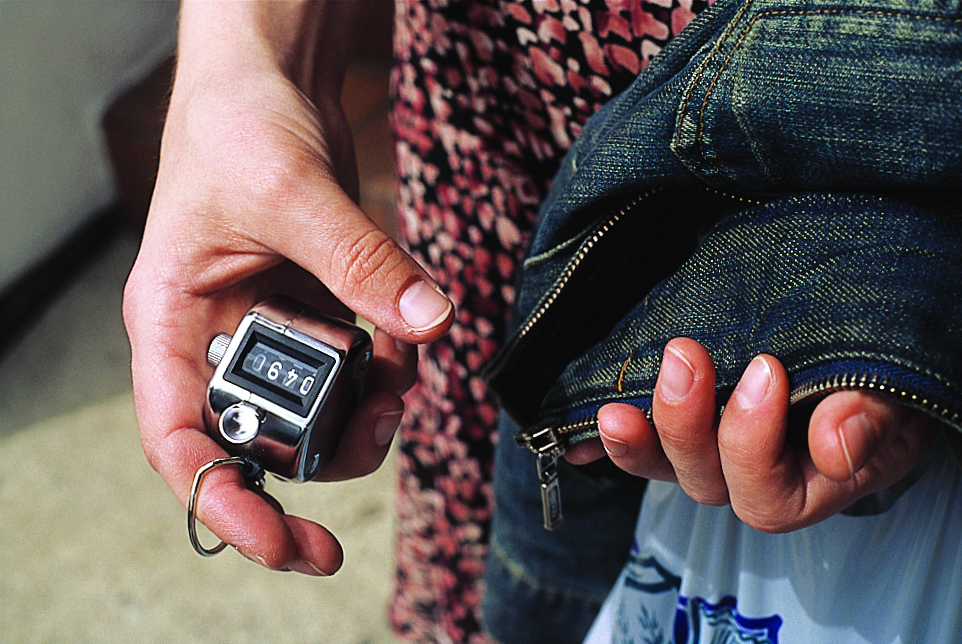 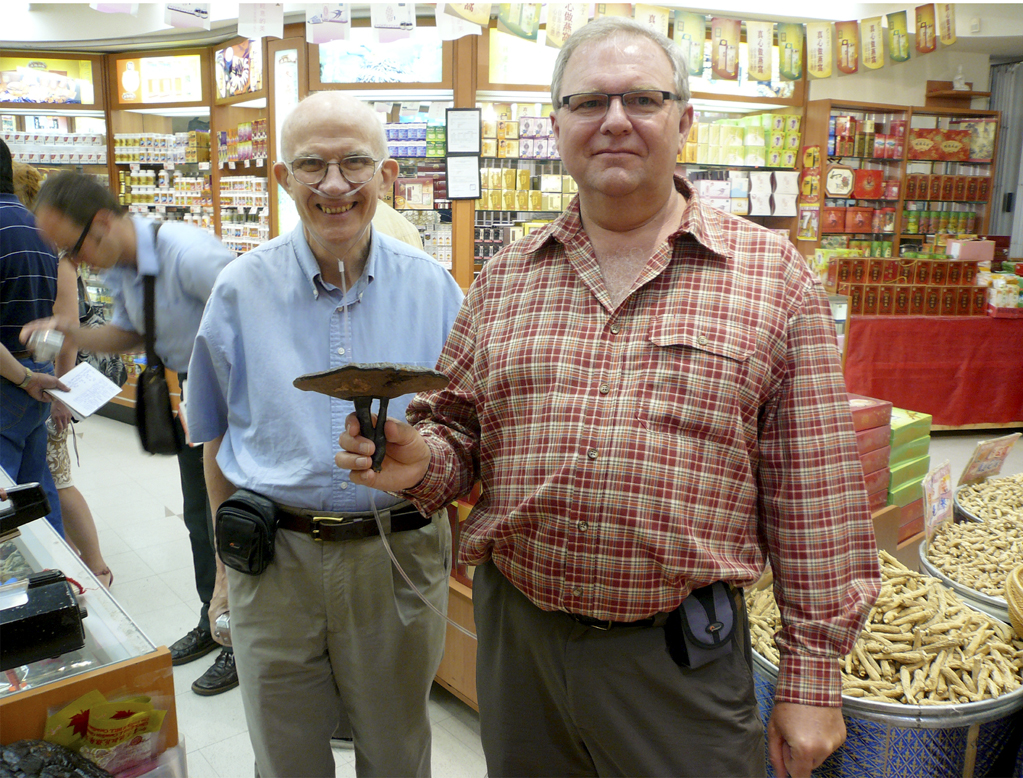 “Slow Walkers of Whycocomagh and Fast Walkers of Whycocomagh came about to address
what seems like an age-old problem: how to spend time walking with other people who
have an ideal pace different from your own. Negotiating precisely what “slow” and “fast”
looked like on any given day was an interesting part of the experience, as was noticing the different relationships to each other and the landscape facilitated by the different speeds. This piece was originally part of a larger project, the Whycocomagh Skillshare, which was conceived of in response to living in a rural context, in an intentional community that centres people labelled with intellectual disabilities. The skillshare took form as an ongoing series of free workshops, presentations and activities and was an attempt to actively seek out connection, engagement and exchange while challenging normative ideas of expertise and value. Since then, the slow walking groups have taken place in a mall in Mississauga, along rivers and downtown streets in Cambridge and on a mountain trail in Banff.”

“Anastasi folded these sheets into eight squares, making them small enough to fit into his pocket. As he walked, he held a tiny, soft pencil against the exposed paper inside the cramped space of his pocket; the resulting marks graph his movements. When he deemed a section complete, Anastasi refolded the sheet, creating a new blank surface, and the process began again. “I love walking,” the artist has explained. “I find that walking does something to my thinking, to my mental process, that is different from sitting or lying down.” These “pocket drawings” are part of a broader practice that Anastasi has described as “unsighted,” including works made while walking (holding a pad, he looks at his destination as he draws) and riding the subway (the train’s stops and starts, bumps and turns, direct the line’s size, weight, and orientation). — Gallery label from A Trip from Here to There, March 15–July 30, 2013. 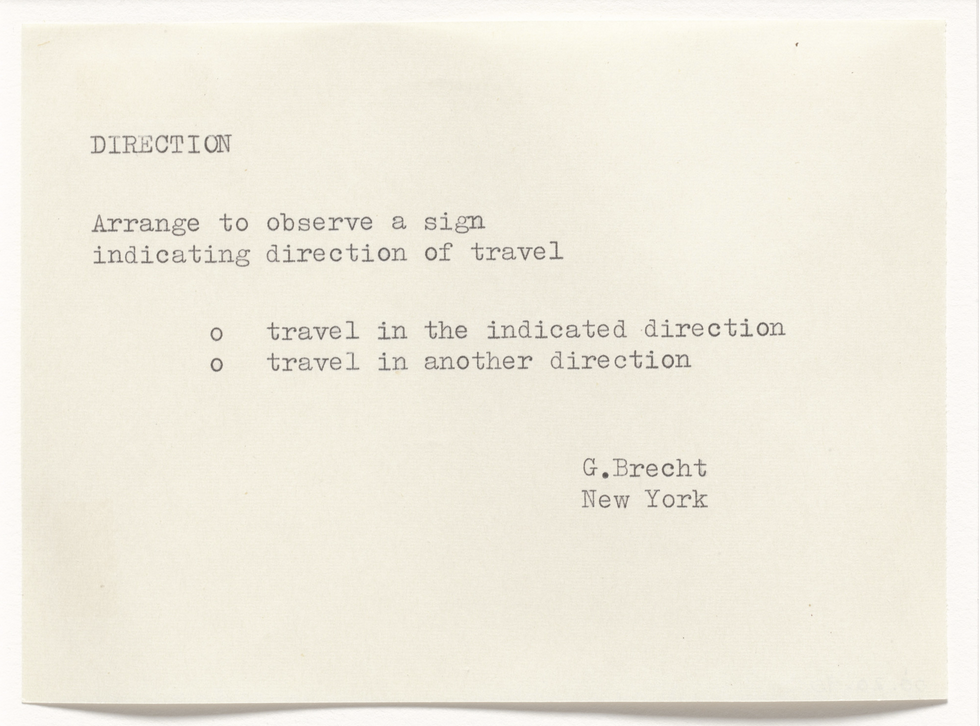 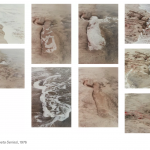 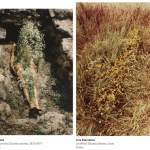 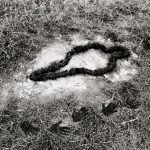 “The “Siluetas” comprise more than 200 earth-body works that saw the artist burn, carve, and mold her silhouette into the landscapes of Iowa and Mexico. The sculptures made tangible Mendieta’s belief of the earth as goddess, rooted in Afro-Cuban Santería and the indigenous Taíno practices of her homeland. Exiled from Cuba at a young age, Mendieta said that she was “overwhelmed by the feeling of having been cast from the womb (nature).” Seeking a way to, in her words, “return to the maternal source,” she used her body to commune with sand, ice, and mud, among other natural media, as a way to “become one with the earth.”

Yet these works resist easy categorization in form or theme. The “Siluetas” are not self-portraits or performance pieces, except perhaps to the few who witnessed them. Each piece was subsumed by the earth, meaning photographs are the only remaining traces. Similarly, the thematic complexity of Mendieta’s life and these sculptures resist collapsing into neat categories of nation, diaspora, race, or gender. By using the body as both an image and medium, these aspects of identity are complicated. Mendieta’s earthworks occupy a liminal space between presence and absence, balancing the inevitable politicization of the self while searching for meaning in older, sacred traditions. …

The “Siluetas” were an ongoing, ritualistic relationship between Mendieta and the land. I read each work as a spell, a fragment of an ongoing incantation that was not “the final stage of a ritual but a way and a means of asserting my emotional ties with nature,” as Mendieta once said. She wanted to send “an image made out of smoke into the atmosphere,” so that each work was designed to disappear, to be reclaimed by the force she revered in an effort to come closer to it.” [credit] 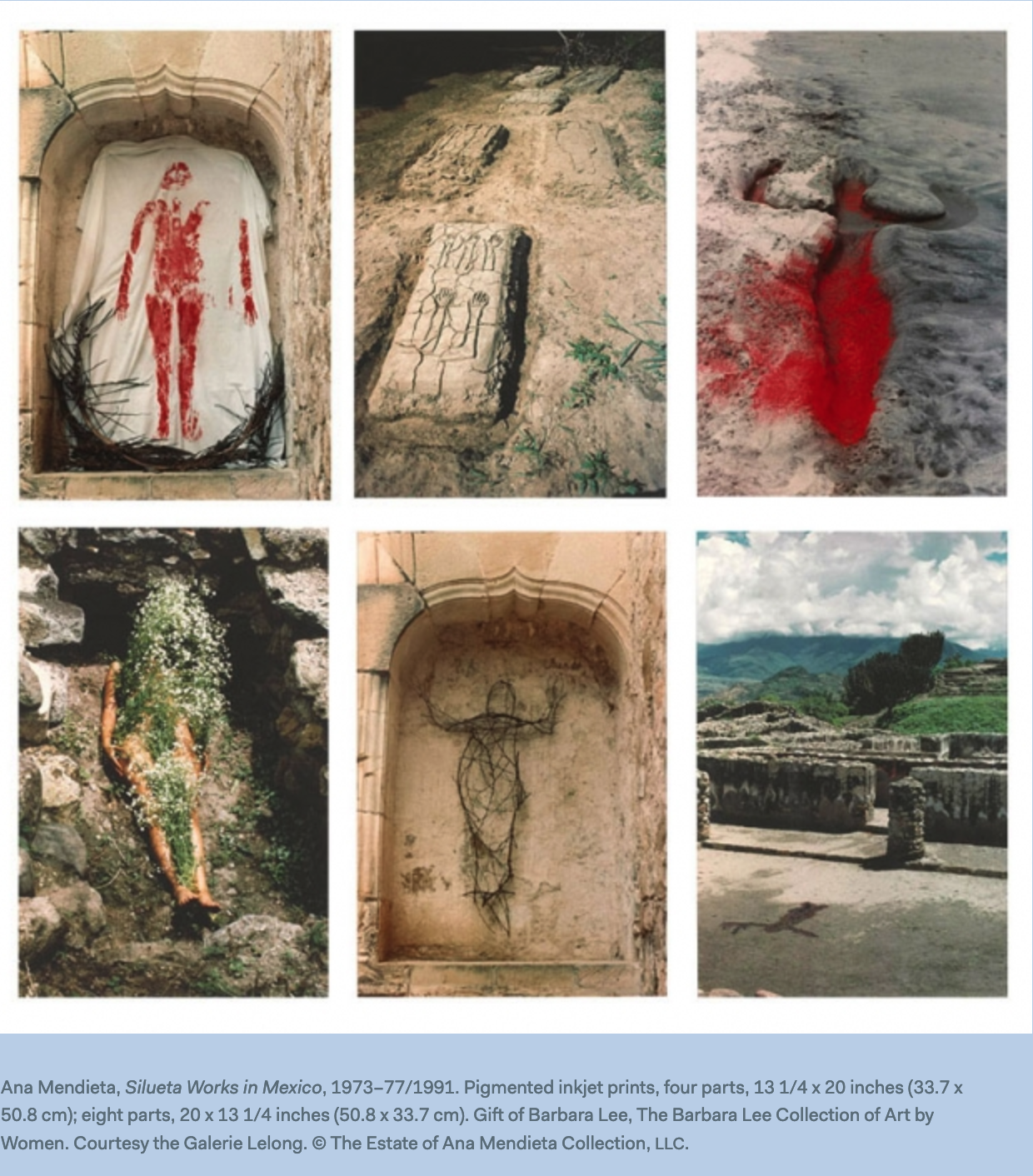 “Spanning performance, sculpture, film, and drawing, Ana Mendieta‘s work revolves around the body, nature, and the spiritual connections between them. A Cuban exile, Mendieta came to the United States in 1961, leaving much of her family behind—a traumatic cultural separation that had a huge impact on her art. Her earliest performances, made while studying at the University of Iowa, involved manipulations to her body, often in violent contexts, such as restaged rape or murder scenes. In 1973 she began to visit pre-Columbian sites in Mexico to learn more about native Central American and Caribbean religions. During this time the natural landscape took on increasing importance in her work, invoking a spirit of renewal inspired by nature and the archetype of the feminine.
By fusing her interests in Afro-Cuban ritual and the pantheistic Santeria religion with contemporary practices such as earthworks, body art, and performance art, she maintained ties with her Cuban heritage. Her Silueta (Silhouette) series (begun in 1973) used a typology of abstracted feminine forms, through which she hoped to access an “omnipresent female force.”¹ Working in Iowa and Mexico, she carved and shaped her figure into the earth, with arms overhead to represent the merger of earth and sky; floating in water to symbolize the minimal space between land and sea; or with arms raised and legs together to signify a wandering soul. These bodily traces were fashioned from a variety of materials, including flowers, tree branches, moss, gunpowder, and fire, occasionally combined with animals’ hearts or handprints that she branded directly into the ground.By 1978 the Siluetas gave way to ancient goddess forms carved into rock, shaped from sand, or incised in clay beds. Mendieta created one group of these works, the Esculturas Rupestres or Rupestrian Sculptures, when she returned to Cuba in 1981. Working in naturally formed limestone grottos in a national park outside Havana where indigenous peoples once lived, she carved and painted abstract figures she named after goddesses from the Taíno and Ciboney cultures. Mendieta meant for these sculptures to be discovered by future visitors to the park, but with erosion and the area’s changing uses, many were ultimately destroyed. While several of these works have been rediscovered, for most viewers the Rupestrian Sculptures, like the Siluetas before them, live on through Mendieta’s films and photographs, haunting documents of the artist’s attempts to seek out, in her words, that “one universal energy which runs through everything: from insect to man, from man to spectre, from spectre to plant, from plant to galaxy.”² 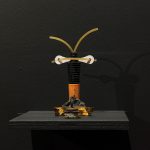 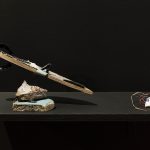 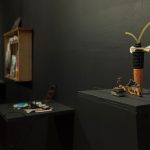 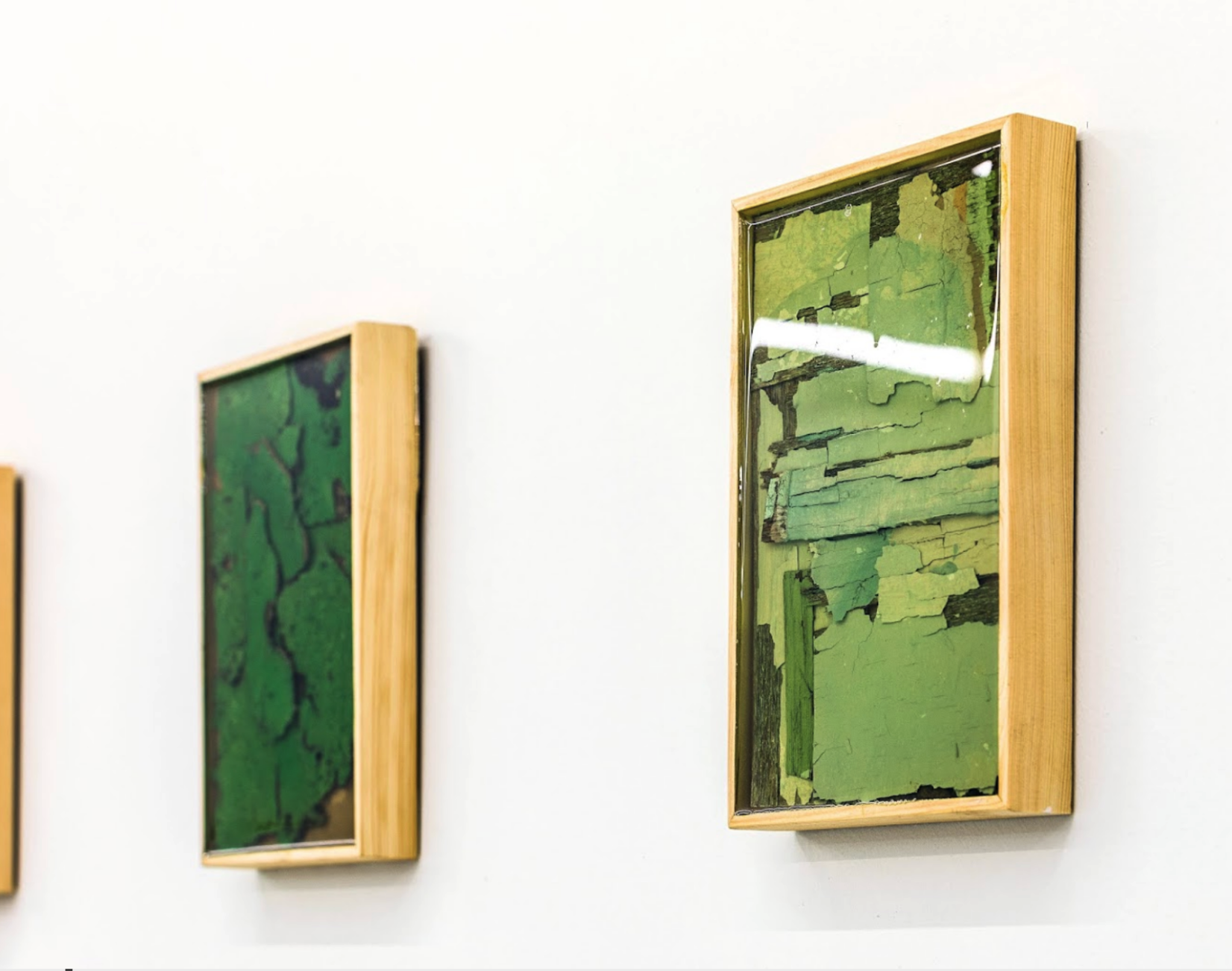 Some artists might take dramatic action to hone in on sound, such as Patrick Gillespie (1980-) in his performative walk, Prosthetic for Public Space (2008) in which he donned a suit made of sheepskin that limited his sight and ability to speak. As he marched wearing this suit in a parade  curated by Fritz Haeg, entitled East Meets West Interchange Overpass Parade (2008), he mainly relied on sound and directions from others to make his way, discovering new people and objects.