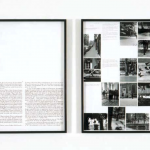 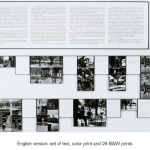 “At my request, my mother went to a detective agency called “Duluc”. She hired them to follow me, to report my daily activities and to provide photographic evidence of my existence. The investigation was conducted on April 16, 1981.” [credit]

“In April 1981, a detective followed the French artist Sophie Calle through the streets of Paris for one day. Hired by her mother at the artist’s request, the detective logged her movements and photographed her activities as she, without his knowledge, recorded her experience of being watched. She later exhibited the reports side-by-side in her piece “La Filature” (“The Shadow,” 1981), which highlights Calle’s method of working over three decades. Staging provocations resembling seduction, documenting them with snapshot photography and a forensic first-person point of view, she crosses the thresholds of voyeur and exhibitionist, public and private, conceptual control and chance.” [credit]