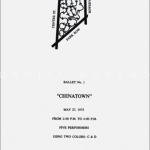 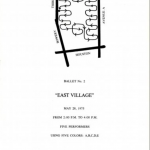 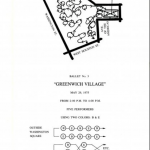 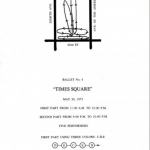 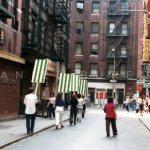 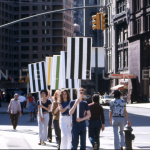 “The artist Daniel Buren explored the idea of ​​movement through performance, it is no longer a question of static works but of an orchestrated choreography. It is in the form of an ambulatory ballet in the streets of New York, that he manages to put his emblematic motifs into action.

Indeed, for 5 days, 5 actors marched in different areas of the city, each of them carrying a poster covered with white and colored bands. In the manner of protesters, the performers walked according to the precise directives of the artist. They had to follow the imposed route and only respond to passers-by by the name of the color present on their respective poster. What could be described not as a peaceful demonstration, but rather as an artistic demonstration, comes to be placed as a questioning of the public. In fact, spectators no longer travel to museums or galleries, but the work comes directly to them.

This performance was not perceived in the same way on the different courses. Indeed, in each district evolved distinct socio-professional categories, the population of Soho was very curious and sensitive to the work, while the residents of Wall Street interpreted it as a threat in the image of a real demonstration.

Thus the performance, which is not a very common mode of presentation with Daniel Buren, creates a real tension with the public. It contrasts with the static aspect of its striped pattern, but manages through the use of posters to dialogue with the spectators and the city.” (credit)