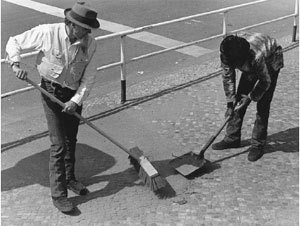 “On May 1, 1972, after the Labor Day demonstrations, artist Joseph Beuys was sweeping up the Karl-Marx-Platz in West Berlin together with two foreign students. This action took place at a time when Beuys had become politicized after the events of 1968 and had first founded the “Deutsche Studentenpartei (German Student Party)” in 1971, then the “Organisation für Direkte Demokratie durch Volksabstimmung (Organization for Direct Democracy Through Plebiscites).” In 1972, he was also expelled from the Kunstakademie Düsseldorf. Since then, Beuys was performing political and ecological actions and interventions, in addition to the more elaborate art performances.

The cleaning squad from May 1, 1972 only requires a small gesture to make plain what Beuys meant by his extended concept of art. He refers to social differences and to a problem of leftist politics: Those who had to clean up after the Labour Day celebrations and demonstrations were the “guest workers.” Yet, the unions had never done much  for the foreign workers who were paid low wages. On the other hand, throughout the 1970s the political Left kept mentioning international solidarity between the lower classes. In this respect, the group of three also achieved some considerable social clearing work. It is no coincidence that the two students and Beuys swept up not only on May 1, but also at Karl-Marx-Platz. While Beuys subscribed to Marx’s analysis of the economic relations, he had a different conception of alienation. Beuys shared the view that every form of capital is a form of slavery, but he saw actions as a way out. Moreover, to him every person was a subject and not an object of history. Hence, picking up the broom is a step towards Beuys’s ideal of self determination. via” (credit)