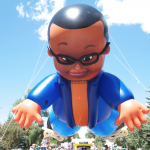 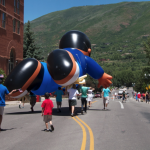 “Your retrospective features a parade-sized balloon which was previously used in another performance at the Aspen Art Museum. Could you talk about the object in this iteration? Particularly your ideas around metaphor and repetition?

The balloon was originally created for a July 4th parade in Aspen, Colorado, and was based on a video that I made called Watch the Sky. In Watch the Sky, I used television footage of the Macy’s Day Parade and then superimposed a caricature of myself over top of a character named Little Bill (a Bill Cosby character).  What ended up in Aspen was a Frankenstein version of this image from Watch the Sky.  Aspen is not a town known for its racial diversity, so when viewers of the parade saw this Black figure—one they could not identify and had no particular reference or even affinity towards—they tended to fill in the gaps by associating this Black male with any popular Black male they could conjure up. Obama, Lebron [James], etc. In the [retrospective], I think the balloon will have a number of functions and refer to a number of things—it is beautiful and ugly, full and empty, present and absent. It’s my body, maybe, but certainly like my body it is already historical and preconceived. Still, if I had to put my figure on one thing it points to and addresses it would be breath.” [credit]