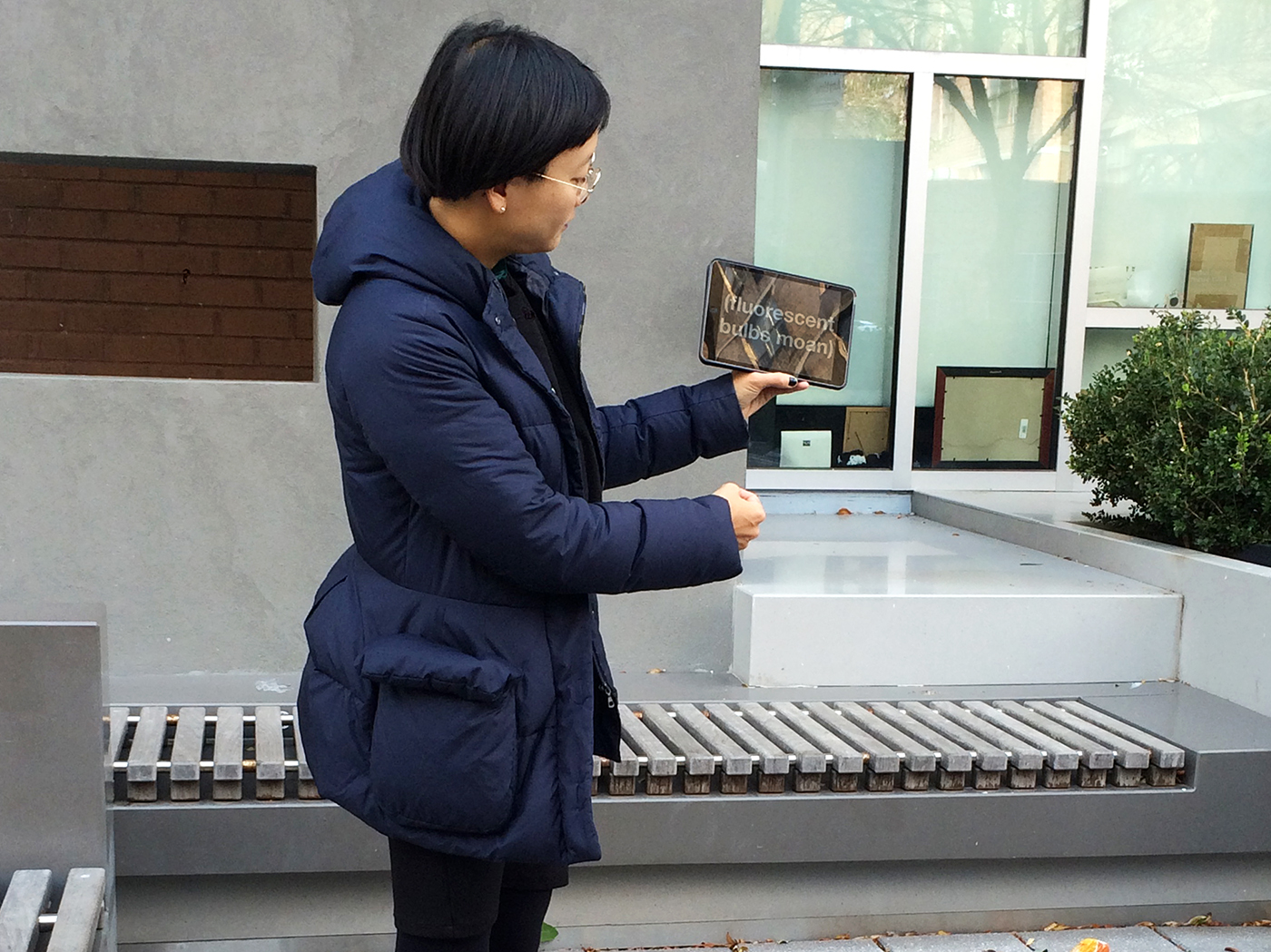 These were among the many sounds that artist Christine Sun Kim invited us to consider during “(LISTEN),” a recent soundwalk she led in the Lower East Side organized by Avant.org. We were a group of about a dozen, following her as she visited a handful of sites around the neighborhood to pause, share a personal memory of hers, and offer us an accompanying composition.

But these compositions were technically silent. Serving as audioguides of sorts, they were void of mp3 players, headsets, or other audio devices. Instead, Kim presented a series of textual prompts on an iPad, like flash cards, that described sounds ranging from those that may play immediately in our minds (the sound of a bicycle spinning) to those that are utterly abstract (the sound of an urge to punch someone). Born deaf and originally focused on painting, she has been exploring sound as a medium for nearly a decade and the various ways we may experience and understand it.

“(LISTEN)” readapts Max Neuhaus’s own soundwalk, “LISTEN,” when, 50 years ago, the musician took a small group of his friends on a sonic journey through the Lower East Side. For his iteration, Neuhaus stamped the word LISTEN on his companions’ hands and encouraged them to absorb the familiar noises of the city. As he recalls:

After a while I began to do these works as ‘Lecture Demonstrations’; the rubber stamp was the lecture and the walk the demonstration. I would ask the audience at a concert or lecture to collect outside the hall, stamp their hands and lead them through their everyday environment. Saying nothing, I would simply concentrate on listening, and start walking. At first, they would be a little embarrassed, of course, but the focus was generally contagious. The group would proceed silently, and by the time we returned to the hall many had found a new way to listen for themselves. 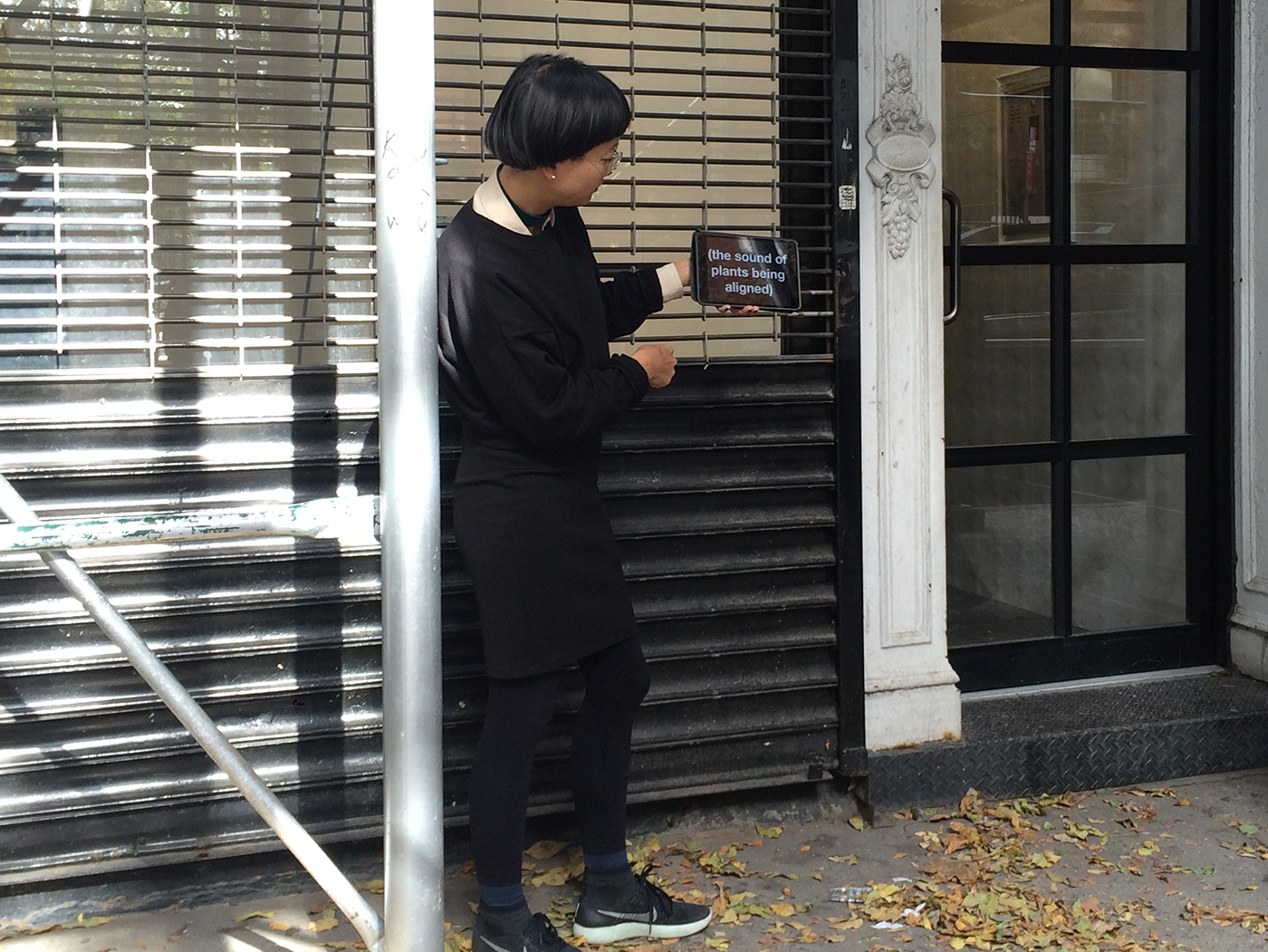 “(LISTEN)” made me hyper-vigilant of surrounding sounds, but with its designated stops and paired stories,  it also brought a more focused approach to Neuhaus’s exercise. At each site, Kim animatedly relayed in American Sign Language the associated memories that her interpreter Vernon Leon spoke aloud. They ranged from her serendipitous encounter with someone who ended up writing her a recommendation for graduate school to a rage-filled bike accident outside the New Museum caused by a negligent cab driver. Outside Audio Visual Arts gallery (currently on hiatus), she recalled experiencing John Andrew’s 2009 exhibition The Now with Before and After. She could not hear its audio component, but she pressed her hands against the room’s yellow walls and through the strong vibrations, experienced the throbbing waves.

The iPad slides that followed such recollections probed our own understanding of sound: descriptions moved from the familiar to the obscure, increasingly prodding individual memories, imaginations, and sensibilities. Short but suggestive, the text pushed sound beyond an experience dependent on hearing; it may be seen or felt, as Kim made incredibly clear as she invited us so associate it with the material and texture (“the sound of pavement floor”); with moments (“the sound of condensation”); with emotional states (“the sound of uncertainty”); and with action and restraint (“the sound of not trying to smell”).

Parentheses often appear in Kim’s visual works, which deal largely with text. The coupled curves appeared in “(LISTEN),” too, bookending each phrase she showed. When anchored in the space between the two lines, words and their sonic implications are visually isolated and highlighted yet are also reduced in both presence and volume. The physical pockets of the neighborhood Kim carved out on her soundwalk worked similarly, becoming temporary spaces for each of us to consider the subjectivity of experiencing sound, which extends beyond the use of just a single sense.

We ended “(LISTEN)” at a quiet creperie next to a boisterous bar, where Kim crossed out the word stamped on each of our hands. As I walked away, my ears picked up the rough grating of a trash can hobbling across park gravel; the metallic tinkling of a trotting dog’s leash nudging its collar.

(LISTEN) took place on October 29 and October 30 around the Lower East Side.”