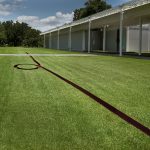 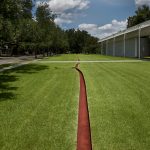 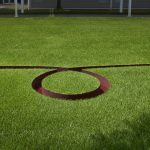 Was installed outside the Menil Collection in Houston, Texas, United States.

“The first version of this work was the ninth of the artist Michael Heizer’s “Nine Nevada Depressions” made around the state in 1968. This one is a circular loop made in a dry lake bed surface, at Massacre Dry Lake, near Vyo, Nevada. Six tons of earth was displaced, making a one foot wide trench, around 120 feet long, with the loop being 12 feet in diameter. Commissioned by Robert Scull. Apparently, no traces remain.” [credit]