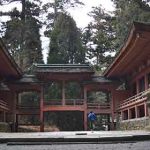 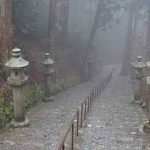 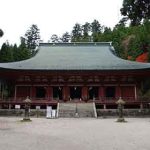 “It is March. It is midnight. Snow still covers the trails of Mount Hiei, which lies just northeast of the ancient city of Kyoto, in central Japan. Kakudo Suzuki, an aspiring Japanese Buddhist spiritual athlete or gyoja, attends an hour-long service in the Buddha Hall. He sips a bowl of miso soup and chews on a couple of rice balls. Then he dresses. His outfit is pure white—the color of death—the same thins he would be dressed in at his own funeral. It is cotton and consists of a short kimono undershirt, pants, hand and leg covers, a long outer robe and a priest’s outer vestment.

He wraps a white “cord of death,” around his waist with a sheathed knife tucked inside. Tendai Buddhist tradition dictates that if Kakudo does not complete his prescribed marathon runs and walks, and all the accompanying tasks, he must take his own life by either hanging or disemboweling himself. He also carries a small bag that holds his secret holy book, which will guide him on his journey and help him remember the 250 prayer stops to make along his 18-mile trip around Mount Hiei. Some of those stops will be to honor monks of the past who did not make it and died by suicide. Kakudo also carries candles, matches, a small bag of food offerings to the deities, and a rosary. Mount Hiei has five main peaks, the highest being O-bie-dake at 2769 feet. It is a lush landscape of rain, high humidity and winter snows. The mountain is located in temperate western Japan, but the combination of relatively high altitude, trees that block out the sunlight and frigid air masses that move in from Siberia turns Mount Hiei into the “frozen peak” during the cold months. The mountain is a wildlife preserve full of forest animals — fox, rabbit, deer, badger, bear, boar and the famous Hiei monkey.

Kakudo puts a pair of handmade straw sandals on his bare feet, and carries a straw raincoat and paper lantern. In stormy weather, the rain destroys the sandals in a couple of hours, extinguishes the lanterns, washes out the routes and soaks the spiritual trail runner to the bone.

Kakudo is one of the Marathon Monks of Mount Hiei, and this will be only the first of 100 successive nights that he will get up at midnight, attend the service and start his marathon run/walk (kaihogyo) around Mount Hiei, completing the route between 7:30 and 9:30 a.m. He will then attend an hour-long service, followed by bathing and the midday meal. After lunch, Kakudo will rest, then attend to temple chores. The last meal is taken around 6 p.m., and Kakudo gets to sleep around 8 or 9. The only variation in the 100-day ordeal will be a special 33-mile run through Kyoto, robbing him of one night’s sleep altogether.

During the route, Kakudo will sit down only once—beneath a giant sacred cedar for two minutes—to pray for the protection of the imperial family. After a first run with a master, Kakudo will be on his own. He may suffer cuts, sprains, stone bruises and punctures to his feet and ankles. He may run a fever, experience back and hip pain, develop hemorrhoids and diarrhea, suffer from frostbite dehydration and hunger. But by about the 30th day, according to the predecessors’ accounts, his discomfort will lessen as his body adapts to the pain and strain. By the 70th day he is run/walking with a smooth gait, head and shoulders erect, back straight, nose and navel aligned. He will continually chant mantras to the god Fudo Myo-o. His spiritual goal is to become completely absorbed in the mountain and its surroundings, so that the pain and discomfort of the physical ritual will not be noticed, or at least be ignored. Kakudo hopes to achieve a state of Enlightenment—the pure spiritual joy of feeling one with the universe. As rugged as it appears, however, this test is merely a warmup in the ultimate spiritual quest of the Marathon Monks—the complete process entails seven more years and becomes progressively and unfathomably more difficult.

It is not clear exactly how these spiritual mountain marathons began, but records show that Chinese and Indian Buddhist texts of the eighth century stated that, “Mountain pilgrimages on sacred peaks is the best of practices.” From about 830 to 1130, pilgrimages took place to mounts Hira, Kimpu and Hiei. Kaihogyo, as the rituals are known today, evolved from 1310 to present.

Since 1885, 46 marathon monks have completed the 1,000-day journey—an ordeal that is an option for the gyoja who passes the 100-day test. Two monks completed two full terms; another died by suicide on his 2,500th day, trying to complete three terms. The majority of monks who complete these odysseys have been in their 30s. The oldest completed his 2,000th day when he was 61 years old. The number of monks who actually died or committed suicide along the path is not known, but the route on Mount Hiei is lined with many unmarked gyoja graves.

When he finishes the 100 days, Kakudo can petition Hiei Headquarters to be allowed to undertake the 1,000-day spiritual challenge (sennichi kaihogyo). If this petition is accepted, he must free himself from all family ties and observe a seven-year retreat on Mount Hiei. Kakudo will then commit himself to 900 more marathons over a seven-year period. The first 300 are 18- to 25-mile runs undertaken 100 days in a row, from the end of March to mid-October over three years. Starting in the fourth year, Kakudo will be allowed to wear socks with the sandals. During the fourth and fifth years, he will run 200 consecutive marathons each year and will be allowed to carry a walking stick. At the completion of the 700th marathon, Kakudo will face the greatest trial of all, called doiri—seven and a half days without food, water or sleep, sitting in an upright position and chanting mantras day and night. If he lives through this trial, which brings him to the brink of death and therefore to the ultimate appreciation of life, he will have attained the Buddhist level of Saintly Master of the Severe Practice (ogyoman jari).

In his book, The Marathon Monks of Mount Hiei, John Stevens sums up the greatest contributions of these spiritual adventurers: “The most admirable thing about the Hiei gyoja is their warmth, open-heartedness and humanity … Facing death over and over, the marathon monks become alive to each moment, full of gratitude, joy and grace … [They] have much to teach us: always aim for the ultimate, never look back, be mindful of others at all times and keep the mind forever set on the Way.”

>What is Tendai Buddhism?

Tendai Buddhism, practiced by the Marathon Monks of Mount Hiei, is a Buddhist sect that was started in the 8th century by a much-heralded and respected monk named Saicho, which means “Highest Clarity.” Saicho was a great synthesizer who brought together the teachings of Korea, China and Japan to form his own interpretations of Buddhist philosophy and form a “great unity with insignificant differences.” Saicho had many followers, and after his death, the modest monastery on Mount Hiei grew into one of the largest religious complexes in the world, a state within a state. Tendai Buddhism has endured over the centuries and its followers still gather together on Mount Hiei to practice its principles and meditations

Dave Ganci, the Rogue Senior, trains Navy and Army Special Warfare troops on desert survival. He describes himself as “a middle-aged desert rat whose skin is hard and wrinkled from too much time running, climbing and drinking cheap beer under the sun.”

This article originally appeared in our March 2003 issue.“