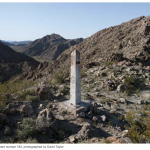 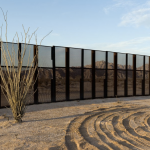 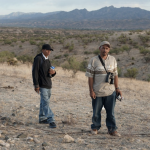 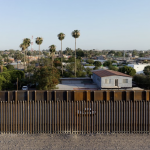 “Beginning in 2007, started photographing along the U.S.-Mexico border between El Paso/Juarez and San Diego/Tijuana. My project is organized around an effort to document all of the monuments that mark the international boundary west of the Rio Grande. The rigorous undertaking to reach all of the 276 obelisks, most of which were installed between the years 1891 and 1895, has inevitably led to encounters with migrants, smugglers, the Border Patrol, minutemen and residents of the borderlands.

During the period of my work the United States Border Patrol has doubled in size and the federal government has constructed over 600 miles of pedestrian fencing and vehicle barrier. With apparatus that range from simple tire drags (that erase foot prints allowing fresh evidence of crossing to be more readily identified) to seismic sensors (that detect the passage of people on foot or in a vehicle) the border is under constant surveillance. To date the Border Patrol has attained “operational control” in many areas, however people and drugs continue to cross. Much of that traffic occurs in the most remote, rugged areas of the southwest deserts.

My travels along the border have been done both alone and in the company of agents. In total, the resulting pictures are intended to offer a view into locations and situations that we generally do not access and portray a highly complex physical, social and political topography during a period of dramatic change.” [credit]