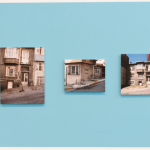 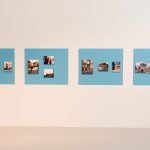 “In 2010, I began photographing the “Istanbul” trees on my daily meanderings through the city streets. These trees were not iconic symbols of the beauty of nature, but rather trees that had negotiated a precarious position within the urban landscape. I returned in 2105, after the Gezi demonstrations to check up on and again photograph my “Istanbul” trees. I returned to try to find the trees, they had become important to me and I knew seeking them out would reveal something –I just wasn’t sure what that would become. I wanted to go back and see, if working from memory, I could relocate these trees. What emerged was a story, theirs and mine, as I moved through the city retracing my footsteps from memory. For me, the trees of Istanbul are a powerful metaphor and stoic symbol of survival speaking to the humanity of the ever-expanding city. The installation Still Visible After Gezi expresses that set of experiences.

For the installation, I conceived each tree as its own story, creating a turquoise frame. Within the frame the tree as I originally photographed it in 2010, smaller images of landmarks that guided me back to the tree in 2015 then finally an image of the tree as I found it five years later or a void. The empty space representing that the tree was no longer there or perhaps I had remembered the location wrong. Still Visible After Gezi includes 16 tree stories.”