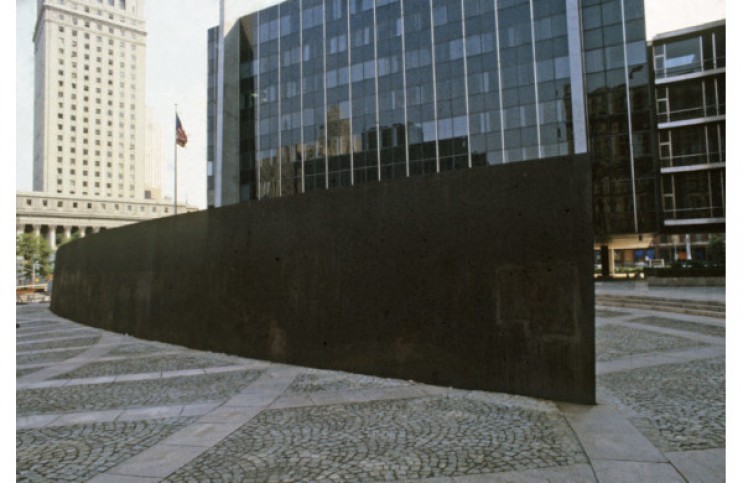 “The story of “Tilted Arc,” a 36.5 meter long, 3.6 meter tall steel sculpture by Richard Serra that was commissioned, installed, and then destroyed by government officials in New York in the 1980s, is one of the most legendary tales in the contemporary art field.

In 1981, the United States General Services Administration (GSA) commissioned Serra to build a sculpture to be installed in the plaza in front of the Jacob K. Javits Federal Building in Lower Manhattan. The location was already a melting pot for various abstract aesthetic positions. The biomorphic plaza featured a circular fountain resembling a sort of elegy to the Golden Ratio. The surrounding brut, Modernist mid-rises meanwhile exemplified the glory of the grid. Serra designed a perfect collaborator in the composition—a massive, linear sheet of steel that leaned ever so slightly, becoming a tilted plane. From an abstract aesthetic viewpoint, it was a masterful gesture. Not only was it formally pleasing, but it brought Modernism up to date with conversations about materiality, ephemerality, site-specificity, and the intersection of art and public life. For the people who lived and worked around the plaza, however, it was a disgrace. The sculpture blocked their path between buildings. It cast a shadow on them while they were eating lunch. It blocked their view of the fountain. And as one worker pointed out during the public trial that was held to determine whether “Tilted Arc” should be destroyed, $175,000 was a lot of public money to spend on “a rusted metal wall.” In the end, a judge determined that the sculpture had to go. The eight-year long saga—which concluded thirty years ago this year—still offers lessons for artists and municipalities, today.”