Presentation on Components of an Artwork (Subject/Form/Content/Context) 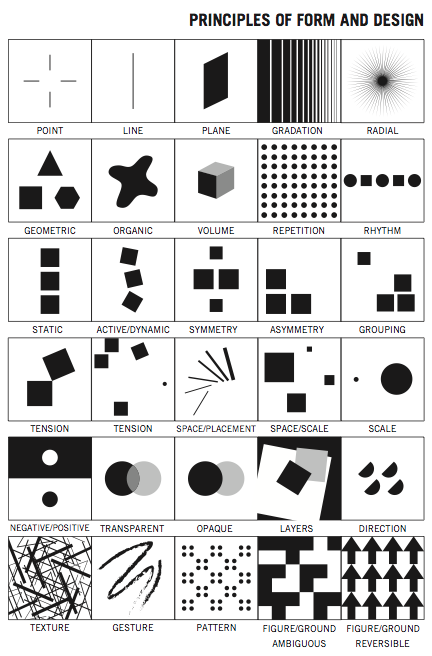 Link to PDF of the above Principles of Design

Value: Shadows from lightness to darkness
-Value variation gives a sense of space and depth to an object—emphasizing its three dimensionality.
-Strong contrast in value can create emphasis.

Color: Color is Light reflected from a surface. It can create emphasis, harmony, emotions, unity, and movement.
-Color has three distinct qualities:
1. Hue- color
2. Value- lightness to darkness of a color
3. Intensity- brightness to dullness of a color
– mixing its complimentary color can dull intensity.

Shape: Shape encloses a two dimensional area. Shape can create most of the elements and many of the principles.
-Types of shapes: Organic-curved edges, continuous Geometric-sharp edges, angles

Form: Form encloses a volume or three-dimensional area.
-Light and dark value variations and space are used to emphasize form.

Space: Illusion of depth and space.
-Ways to create space:
1. Overlapping — Shapes or forms in front of each other
2. Holes and cavities

Unity/Harmony: Relates to the sense of oneness, wholeness, or order in a work of art. Combining similar colors,
shapes, lines, textures, and patterns in an artwork can create harmony. Movement: Refers to the arrangement of parts in a work of art to create a slow to fast action of the eye.
-Pattern, contrast, line can create this.

Rhythm: It is a type of movement in an artwork or design often created by repeated objects.
-There are different types of rhythm:
1. Regular- Example: 9s9s9s9s9s9
2. Irregular- Example: qqeeqqeyyy

Emphasis: refers to placing greater attention to certain areas or objects in a piece of work.
-Emphasis can be created through sudden and abrupt changes in opposing elements.
(Example: bright yellow dot in large black area)

Proportion: Refers to the relationship of certain elements to the whole and to each other.

Pattern: is created by repetition of (not limited to) shape, line, color, or texture